WEBINAR | Celebrating 30 years of the Global 16 Days Campaign to End Gender-Based Violence: A Reflection on the Journey and the Future hosted by The United Nations Population Fund

The United Nations Population Fund is celebrating 30 years of the Global 16 Days Campaign to End Gender-Based Violence: A Reflection on the Journey and the Future!

The Global 16 Days Campaign was initiated 30 years ago by the Center for Women's Global Leadership to galvanize women and allies worldwide to raise awareness about violence against women and demand that governments do their part to end it. Since then, more than 6,000 organizations and other entities, including governments, have used this campaign in over 180 countries to break the silence about many different forms of GBV and demand public action. UNFPA has been a leading voice against GBV and is aiming for its eradication by 2030. The COVID-19 pandemic has created a surge in GBV which UNFPA estimates will lead to a one-third reduction in progress to reach the goal of zero GBV within the next decade. Register for their celebration of the 30 years of the campaign!

WEBINAR | US MOSQUE SURVEY: BASIC CHARACTERISTICS OF THE AMERICAN MOSQUE hosted by The Institute for Social Policy and Understanding

The US Mosque Survey 2020 is a comprehensive statistical study of mosques located in the United States. The survey is an ongoing decadal survey which was conducted previously in 2000 and 2010. The results of the US Mosque Survey 2020 are divided into two reports. Report 1 focuses on essential statistics, mosque participants, and mosque administration. Report 2, which will be released in late summer 2021, focuses on Islamic approaches in understanding Islam, perspectives of mosque leaders on American society, mosque activities, and women in the mosque. Both reports are authored by Dr. Ihsan Bagby and jointly published by Islamic Society of North America (ISNA), Center on Muslim Philanthropy, and the Institute for Social Policy and Understanding (ISPU). 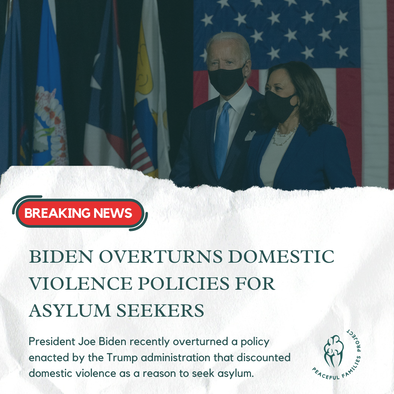 President Joe Biden recently overturned a policy enacted by the Trump administration that discounted domestic violence as a reason to seek asylum. While asylum seeking laws in the U.S. still have a long way to go, this is a step that will drastically change the lives for many survivors of domestic abuse. We applaud this important step in creating an environment that protects vulnerable and underserved populations globally from such abuse. During his presidency, the Trump administration stated that domestic and gang violence were generally not grounds for asylum. This negatively impacted several survivors, particularly in Central America, who were attempting to seek asylum in the U.S. Mr. Biden has given the Departments of Justice and Homeland Security until October to restore protections for victims of domestic and gang violence. ​
View the Article

DCADV is excited to bring you the 2021 Virtual Advocates’ Retreat and Conference Series! Each year, this action-oriented conference brings together survivors, advocates, and victim service providers to connect, share information, and engage in critical thinking analysis about efforts needed to address and prevent intimate partner violence, family violence, sexual violence, dating violence, and/or stalking. For the health and safety of all involved, we've moved this year's conference online in a series of webinars over the spring/summer of 2021.

Register for the Next Session!

Registration is now open for our next session!
Wednesday, August 11, 2021    1:00 p.m. - 2:30 p.m.
​
The Restorative Justice's Community Approach
This webinar will explore the importance of a community approach for domestic violence based on the four aspects of Restorative Justice, and the potential to promote trauma healing and resilience. It will provide a short experience of a Peacemaking Circles.

This session is highly interactive, and limited to 20 participants during the live webinar.  Please register only if you plan to attend live.  Once capacity is reached, we will start a waiting list.  Folks will be upgraded from the waiting list as space becomes available.

This session will not be recorded, but resources will be made available at www.dcadv.org/retreat after the webinar.

Presented by Charito Calvachi-Mateyko, Latino Initiative on Restorative Justice
Charito Calvachi-Mateyko is the founding member of the Latino Initiative on Restorative Justice, Inc. (LIRJ), a 501(c)(3) and she is the principal of Delaware Transformative Justice, LLC, both based in Newark, DE. In her service to the community, appointed by three Delaware Governors, she is Co-Chair of the Delaware Hispanic Commission. Additionally, she is the Coordinator of the Delaware Civil Rights Coalition, and board member of ACLU-DE. She is the 2016 recipient of the Restorative Justice Life Achievement Award from AdVoz in Lancaster, PA. Her publications range from topics in Circles and trauma healing and resilience to the strategic use of the media in peacebuilding. With a B.A. in political sciences, and a doctorate degree in law from PUCE, she also obtained a master in conflict transformation under the mentorship of Howard Zehr, known as the “grandfather of restorative justice” at CJP in EMU. She has been a keynote hired by the UN and the USAID and COMJIB.

Arabic/English Webinar on May 26: Emotional Support for You and Your Communities During the Pandemic hosted by Widener University

We invite Arabic-speaking refugee community leaders to join us on May 26 at 3 p.m. EST for "Emotional Support for You and Your Communities During the Pandemic," a brief webinar and live QA  with faculty and staff with expertise in mental health and wellness, refugee community services, and primary care. In Arabic and English, we will share resources and strategies for community leaders who are assisting refugee community members experiencing increased stress or trauma during the pandemic. https://widener.zoom.us/j/93931760351
Additionally, we value feedback on prior materials and webinars developed by our team: Feedback Form. The link to this Feedback Form is unique to you and should not be forwarded to others.
الدعم العاطفي لك ولمجتمعاتك أثناء تفشي الوباء